the Gift of Conflict 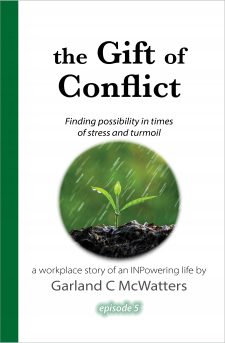 A cryptic text message from a one-night stand he had on a business trip thrusts Marcus Winn into a moral crisis. As he tries to sort it out, Marcus is engulfed in a swirl of personal and professional conflicts. Marcus’s first reaction is to bemoan his imagined loss of status in his company, the potential loss of his new lover—should she find out the truth—and the loss of respect from the people he cares about the most.

Marcus’s mentor tells him that conflict often presents a gift that would not otherwise have been available. Marcus clings to that hope as he looks for an INPowering way to work through the web of conflicts that seems to be coming at him from all directions. Through it all, Marcus develops a deeply personal understanding of conflict, which sharpens his ability to tune in to the conflict stories others are telling that he had been missing—a gift in and of itself.

This fifth episode in the Marcus Winn series, the Gift of Conflict, explores the issues of working through conflict and finding a way to learn the way out by listening to the stories told in the conflict itself.

Use the discussion questions at the end of the story for self-study, group discussion, and book clubs.

Finding possibility in times of stress and turmoil